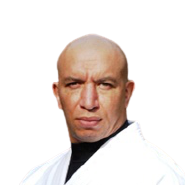 Age55
Height6' 1 (185 cm)
NationalityUnited Kingdom
Biography(references)On 18 February 1996, Hasdell made his shootfighting debut for Rings Holland at Kings of Martial Arts against Dutch Thai boxer and multiple time world champion Andre Mannaart. Hasdell went through to the final with two knockouts over American Jeet Kun Do practitioner Scott Dobbs and Italian Judo and Karate champion Paolo Di Clemente. He would also feature on the card and defeated Dutch karate champion Peter Dijkman by rear naked choke, winning the vacant U.T.F super-fight heavyweight shootfighting title. In 2000, Hasdell was awarded his blackbelt in Ju Jutsu and personally invited by the Prince of Abu Dhabi, United Arab Emirates to compete in the ADCC Submission Wrestling World Championship on 1 March 2000. Shortly after competing in his final mixed martial arts bout in Rings, Hasdell competed in a shootboxing match on 2 February 2002, in Tokyo, Japan against French fighter Cyrille Diabate.